I didn’t know what was about to happen. All I knew was what that Mistress had given Me explicit instructions and I would follow them to the letter. Over four years of servitude I had come to trust Mistress, and found enjoyment in any and all activities she gave me. Though we were miles apart, and met infrequently to play, the connection was strong, and I happily obeyed her every whim.

When I had asked Mistress to create a special instructional clip for me, I knew that I was giving up total control. I hadn’t exactly specified what I wanted, just that I wanted Mistress to tease me in new and exciting ways. At one point I had even begged Mistress to push the few remaining limits I still had. I might have also let it slip that some of my hard limits weren’t so hard anymore, much to her amusement.

A quick glance at the clock told me that there were only 3 minutes left before I could start my clip. I’d been good, and followed all instructions dutifully, and had not been to the toilet once since I’d started to drink the water, and I was desperate, so very desperate, in so many ways.

My clit pulsed, and I could feel the slickness of my own arousal coating my thighs. 10 edges after being locked in a chastity belt without permission to orgasm for 6 months straight hadn’t been kind to my willpower. I was so tempted to orgasm, but I knew better. I didn’t know if Mistress would allow me release today, but I hoped she would. She seemed to delight in denying me release.

I had never played with toilet humiliation or piss before. It had originally been a hard limit, but over time my views of the fetish had changed. The media had formed a rather jaded opinion of those that played with their piss in my mind, but Mistress had shown that there was nothing to be scared about. After a night out together, and a trip to the loo, Mistress had made an offhand comment about becoming her personal golden toilet after coming back from the loo, and I was fascinated. After all, it was only piss, a perfectly normal bodily function, and according to Mistress one that should be savoured.

I watched the seconds tick by, and pushed on my belly. The pressure was intense! I’d never felt anything like this before. It was confusing, and yet at the same time incredibly hot. It was an odd combination of sensations as my clit had almost been rubbed raw by edging, and I was in desperate need of release – whether that release was an orgasm or pissing, I wasn’t sure.

From my kneeling position on the floor, I reached up to the table where my laptop sat and clicked play.

I smiled at the screen, Mistress always knew best.

“Wanting to become My personal toilet, means you must first train yourself to become acquainted with the taste of piss. If you have followed the diet I set, out, and drank plenty of water, you will enjoy your experience. If you have failed to follow all of My instructions … well, let’s just say that you won’t be sitting properly for a week straight.”

I squirmed. I remembered the last time I had failed to follow one of Mistress’s instructions. My excitement had overcome me, and I had missed a vital instruction last month. Even though I had wielded the paddle that caused my bruises, Mistress watched. If I went easy on myself, even once, then I would have to get the cattle prod out – a particularly nasty toy that I did everything to avoid.

“Now, I want you to get the cup, and piss in it for ten seconds. Whilst it’s warm you will bring it straight to your lips, and drink it all down like a good little girl for Me.”

I gulped – almost comically loud, but followed all the instructions. Peeing in a cup was not easy, and nor was stopping. It was so very tempting to continue, but I knew that the disappointment I would feel would outweigh any pleasure I’d get at emptying my bladder.

I brought the cup up to my lips and hesitated. It almost looked like very flat, and weak ginger ale.

I shrugged my shoulders and mumbled ‘down the hatch’. The taste was surprisingly not bad, but I guessed that was mostly because it my piss was rather weak.

When I finished the last drop, I restarted the clip and found my next set of instructions to be very much the same. I would piss in a cup for ten seconds, and then drink it.

The fourth round was where things started to change.

“This time, after you have pissed in the cup for me, you will edge yourself, and when you are on the brink of orgasm you will drink your piss.”

After edging 10 times in one day bringing myself to the brink of orgasm yet again was easy.

Mistress continued this little game until I’d had a grand total of 20 edges, and then she went in for the kill.

Before I lost my nerve I set up the camera, clicked record, and climbed into the bath.

I pulled down the dark blue lacy thong that Mistress chose earlier that day, and slowly dragged my hands back up my legs. The exhibitionist side of me wanted to put on a show for Mistress, even though I also wanted to run screaming, and hide under my covers.

My faith in Mistress was unwavering, and she’d never give me more than I could handle. With that in mind, I cupped my sex, and let a finger slide into my wet cunt. I was surprised by my own heat – it almost felt hot enough to burn. My cunt hadn’t been this hot since, well, since the last time Mistress had edged me, teased me, and pushed my limits.

It was easy enough to start pissing, and now that I wasn’t concentrating on making sure I didn’t wet the carpet as I tried to piss into a cup, I started to enjoy the sensation. I had wondered what was the point in pulling my panties down if I was going to wet them, but I could feel them grow heavier with my warm piss around my ankles. It made me hyper aware that I was almost standing on my own piss covered panties, and it turned me on.

I half expected my piss to wash away any evidence of my arousal, but there was so much of it the two fingers I managed to slip in slid effortlessly up to my clit. I started to slowly circle my clit as I concentrated on emptying my bladder at the same time, and it didn’t take long before I could feel the orgasm building. But, with all my 10 second increments of pissing earlier, I could hear that my bladder was starting to empty. I rubbed my clit faster, and faster, spraying my own piss everywhere, desperate for the orgasm that I was foolishly trying to chase.

As the last few drops of piss dropped from my labia, I gave up trying, and removed my hand. I felt a sense of euphoria, even though I hadn’t orgasmed.

It seemed as though I had discovered a new fetish.

Sign up to my newsletter, and get a free clip! RubyRoussonNews.com

The time has finally come.

This site uses Akismet to reduce spam. Learn how your comment data is processed. 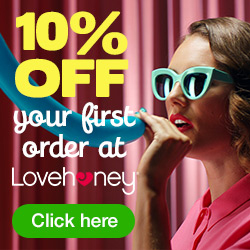