I’m going to be experimenting with erotica. Whatever I post won’t be finessed, but it will be hot!

The instructions were clear, all he had to do was spend a full day naked and locked, then he’d be rewarded. It sounded simple … in theory. He’d been in chastity up for 2 weeks, but his Mistress never did anything easy. He was proven right when his doorbell rang at 6am. He rushed downstairs to answer it, completely forgetting a robe.

Out of breath, he opened the door. “Mistress!” he exclaimed.

Her red lips pulled up into a smirk, “On your knees, head on the tile. Stay.”

Though anyone could see in if they wished, he dropped to his knees and rested his head against the tile. His cage clinked against the hard surface. His Mistress stepped over him, swatting him on the bottom as she passed. He stayed still, feeling his breath heat up the tile. He would wait for as long as she desired.

Once his Mistress had made herself comfortable, she tapped her crop on the leather seat.

But knew better than to get up and walk. This was a test. He shut the front door with his head and crawled into the room his Mistress was sitting in.

“I have a present for you. You may look up. You may not speak.”

He looked up but kept his eyes focused straight ahead. One of his earliest rules has been no direct eye contact, and it only broken it a select few times.

The tap of her crop drew his attention to the corset lying beside his Mistress. The corset was covered in a breathable mesh material, with what looked to be steel boning. It was plain, but pretty.

He furrowed his brow, did Mistress want help putting it on?

“Did you really think I’d let you have an orgasm for just wearing a chastity cage? Oh no, no today you’re going to be locked up in another way. You are going to wear this corset for exactly 24 hours, if you manage to keep it on you will earn an orgasm. If you fail, I will add another 3 months without the possibility of an orgasm. I expect you’ll fail, but it will be interesting seeing you try. Now, stand up. I will put this corset on you, and then I will leave. I’ll be back to take it off when you decide you can no longer take it.”

He rose to his feet and kept his eyes on the floor. Every touch sent shivers down his spine. Touch was a privilege for him. He twisted with the slightest touch from his Mistress as she directed him.

She leaned in close by his ear, “Breath normally as I tighten, and don’t try to gulp in air.”

The first few tugs were easy, and then the constriction began. He could feel his waist cinch in, inch by inch, until his Mistress was happy.

Though he thought it odd, he did not argue. Once his eyes shut, he felt … everything. His ribs ached against the bondage of the corset, and his skin chaffed at the abrasive nature of the lace, and his breath came in short shallow bursts.

And then he heard the lock snap shut.

“I’ve knotted the ribbon up in a way that will mean no getting out. Your 24 hours start now.” 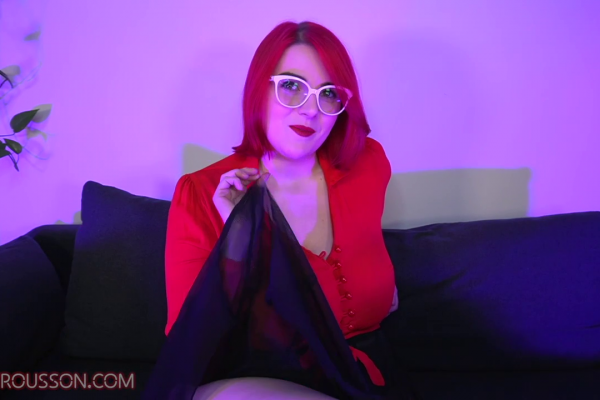 This site uses Akismet to reduce spam. Learn how your comment data is processed.

Pirated clips from a submissive customers point of view

Clip Series: The Quick Fuck Up